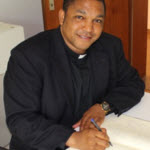 Every Good Friday, the Church’s Liturgy turns her gaze upon the face of Christ, the suffering servant; the One whom Isaiah describes as “a man of suffering, knowing pain.” Or, as one translation puts it, “a man of sorrows, and acquainted with grief.”

As we walk with Christ through the pages of the Gospels, we observe that he is indeed a man of sorrows, and one who is acquainted with grief. He weeps over Jerusalem and at the grave of his friend Lazarus. He repeatedly experiences opposition, and he suffers from being misunderstood by those close to him. He spends long hours in the presence of those suffering from diseases and from demons. Long before Christ is scourged and crucified, he is already a man of sorrows, a man well-acquainted with grief.

This past Sunday morning, I attended a Mass at the parish where I once served as pastor. After Mass, as I was greeting people, I saw a man standing off to the side waiting to see me. When he finally approached, he broke down in tears. Some years ago, he suffered the tragic loss of a child and I had offered the Funeral Mass for his child.

One of the most beautiful gifts that Christ gives to priests is the gift of sharing in the sorrow of his pastoral and priestly heart. When, for example, we see people who have abandoned the Faith or people who are immersed in sin, we mourn for them. When we see the people entrusted to us suffering physically, spiritually, or emotionally, we feel it deeply. When we see people treated unjustly, our hearts are moved with pity for them. When we see people within the Church treated poorly, our heart breaks for them.  And this is a beautiful gift from Christ. For Christ was a man of sorrows, and acquainted with grief. So too, his priests are called to be men of sorrows, men acquainted with grief.

The second thing we must avoid is allowing the gift of priestly sorrow, to be reduced to problem solving.  Giving the quick, unreflective, memorized answer.  The person, for example, whose loved one committed suicide, is not looking for an immediate treatise on free will or a lecture on the mitigating circumstances in regards to mortal sin. He is looking for a father. He is looking for someone who is able to be a man of sorrows, a man acquainted with grief. He is looking for Christ.

When confronted with evil, we can sometimes be like James and John in today’s Gospel. We want quickly to resolve the problem. We think (and I have been there), a few well-placed balls of fire from the sky could solve a lot of our problems. This, however, reduces the beauty of the priestly vocation.

All of you are in seminary formation at a very difficult moment in time. The obstacles before you are many and great. In the face of all of these difficulties, you could be tempted to become paralyzed with fear and say, “I wish I hadn’t been born in this time.” Or, you could be tempted to take the quick and easy way out by raining down fire on those who appear to be obstacles to the truth.

I was moved the other day when I saw that man waiting for me. What a privilege it is to be a priest and to carry in our hearts this kind of sorrow, this kind of grief. There are people also waiting for you. With all of their burdens, all of their pain, all of their grief and suffering, they are standing somewhere between here and Jerusalem. They are waiting for your priestly ministry, they are waiting to encounter—in your person—the presence of Christ, the Good Shepherd. To find them, we must become men transformed into an oblation by the sacrifice we offer at the altar. (Prayer Over the Gifts). We must become men of sorrows, men acquainted with grief. Let us then turn once again to the altar, toward Jerusalem, toward the Cross, toward Jesus Christ, the man of sorrows, the man acquainted with grief, toward the Resurrection.