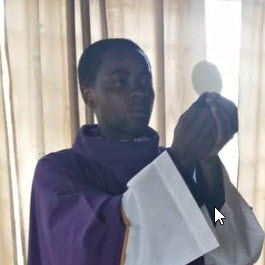 Father Zifac: the stone is rolled away

Mary Magdalen and the other women, some of Jesus’ most devoted disciples, who followed Jesus in Galilee and provided for him as his benefactors, the same women who watched as Jesus was crucified and died on Friday, who followed and saw where his dead body was laid to rest, are not at the first moment they can, headed back to the tomb with spices, intending to grieve and honor their friend with proper burial rites. They have been worried about the stone, but when they look up, it’s already moved aside. The stone is rolled away. Without hesitation, they duck into the tomb to find out what was going on. These women are devoted, persistent and brave disciples. As they get in they have two instructions: do not be afraid and go and tell. This proves the point that the resurrection is not a conclusion but an invitation to fuller union with the risen Lord.

The stone has been rolled away. The stone of ignorance, fear and anxiety has to be rolled away for us to experience Jesus. As the women go to the tomb, it is a stone which is their greatest trouble or hardship: who shall help us roll the stone away? They lived in the fear of Good Friday and forgot the hope of Easter. Perhaps you and I are living with the same mentality. We are so filled with the sorrowful part of the death of Christ that we forget or minimize the power of the Resurrection. We need to let the stones that block us from reaching Christ be rolled away. God can roll away the stones of our lives if we give him the chance.

Christ was the main stone, the cornerstone, the foundation stone, such that the stone blocking people from experiencing him has no meaning nor power. Man had his power on Good Friday but with this Easter, God shows us that he is in charge. What stone(s) block us or weaken our steps to run to the experience of the Crucified Jesus? This Easter, may Christ roll away all and every stone no matter the size from our lives and implant his power and presence in us.

We, authentic Christians do not believe in the empty tomb, but in a living Christ, whom we experience through a living faith in his word, in the Eucharist and in his Church. We also experience him in our love for one another. This love for one another has very much to do with Jesus’ resurrection, with the awareness that he is alive and present in our midst. That is a point of faith that cannot be proven by reason nor by history. Even the gospels do not give us a rational proof of the resurrection of Jesus. There are a couple of interesting points which may have escaped our attention when reading the gospels.

The first one is the reaction of Mary of Magdala upon finding that the tomb was open and empty: “It was very early…and we do not know where they have put him.” The empty tomb did not automatically lead Mary of Magdala to faith in the resurrection. Then comes the second part: “So Peter set out…”. Actually, John does not say that Peter did not believe. He only says, as in contrast, that the other disciple “saw and believed”.

Faith makes all the difference, tomb or no tomb. For Mary of Magdala, and for Peter, the empty tomb did not bring them to faith in Jesus’ resurrection. But for the other disciple, John himself, faith did it: he saw and he believed. This faith experience will further be confirmed in the appearances of Jesus as the risen Lord. In the Sundays ahead we shall see this.

Friends, there are some Christians who do not believe in the Resurrection of Jesus as a reality. These are people who look at the empty tomb, so what they see is just an empty tomb, which evidences nothing. They do not see the risen Lord. They are so busy with looking at the emptiness of the tomb that they are blind to realizing that he who was space-bound for some time has now been glorified and it follows that the tomb be empty. Such people cannot believe therefore either in the Eucharist, the Church nor of his presence in the world in the Christian community gathered in his name.

It is either emptiness or fullness, darkness or light, despair or hope, frustration or promise. Paul says: if Christ has not been raised from the dead, our faith is senseless and empty. Thus, today’s feast is the greatest of all feasts, yet its meaning remains deeply and personally fruitful if one celebrates with faith in the active and living presence of Jesus Christ in the world. May Jesus, risen from the dead, grant us an increase in faith.