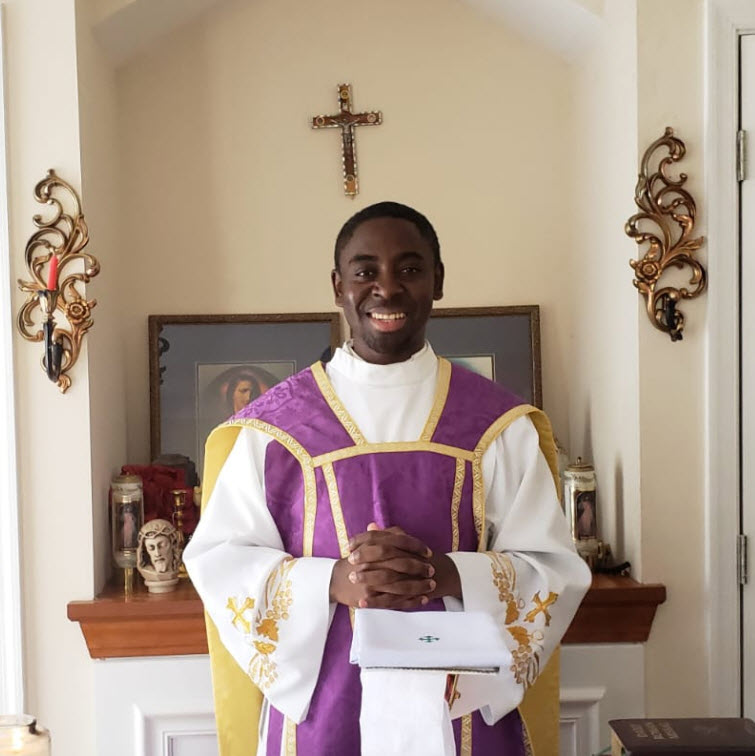 Father Denis: The Christian God and Culture in Africa, Part 2

Many have thought, and I believe falsely so, that Christianity is foreign and radically opposed to African culture. With a lot of shortsightedness, they claim Christianity is a European affair, their way of relating with the divine. Thus, for them Christianity is just one option among a myriad, an option which does not find fertile ground for growth in the soils of Africa. But is that really the case? That is the question I intend to attempt an answer to.

Is Christianity is a European concept? My categorial answer to that is no. Christianity did not originate in Europe but in Palestine. The Middle East is the cultural milieu in which Christianity was born. It is from this hub that Christianity was exported worldwide; first to Asia minor then to Europe. But in this early process of exportation it was still clothed in Middle Eastern garb. That is why the Romans considered it foreign; as one of those eastern religions whose founder was a rabble-rousing Jew whom they crucified. It was considered first and foremost as a depraved superstition, the term superstitio was commonly used in the period to describe a new and unlawful cult without official sanction of the Roman Empire. The emperor Domitian had previously persecuted the Christians, classifying them as a superstitio Iudaica given its historical roots as a Jewish movement, which is acknowledged by several of these writers, especially Tacitus and Lucian.

The following are just some excerpts of what Roman writers and intellectuals thought of the new religion of Christianity.

… since the Jews were continually making disturbances at the instigation of Christus, he [Emperor Claudius] expelled them from Rome.

In his reign many abuses were severely punished and repressed, and as many new laws were instituted; a limit was set upon spending; public banquets were reduced; the sale of cooked food in taverns was forbidden, except for vegetables and greens, while formerly every kind of food was available; punishment was inflicted on the Christians, a set of men adhering to a novel and mischievous superstition; he put a stop to the wild activities of the charioteers, who for a long time had assumed the right of ranging at large and cheating and robbing for amusement; the actors and their companies were banished.

But all human efforts, all the emperor’s gifts and propitiations of the gods, were not enough to remove the scandal or banish the belief that the fire (summer, 64 C.E.)had been ordered. And so, to get rid of this rumor Nero set up as culprits and punished with the utmost cruelty a class hated for their abominations, who are commonly called Christians. Christus, from whom their name is derived, was executed at the hands of the procurator Pontius Pilate in the reign of Tiberius. Checked for the moment this pernicious superstition broke out again, not only in Judea, the source of the evil, but even in Rome, the place where everything that is sordid and degrading from every quarter of the globe finds a following. Thus, those who confessed (i.e. to being Christians) were first arrested, then on evidence from them a large multitude was convicted, not so much for the charge of arson as for their hatred of the human race. Besides being put to death they were made objects of amusement; they were clothed in hides of beasts and torn to death by dogs; others were crucified, others were set on fire to illuminate the night after sunset. Nero threw open his grounds for the display and put on a show at the circus where he mingled with the people dressed like a charioteer and driving about in his chariot. All this gave rise to a feeling of pity, even towards these men who deserved the most exemplary punishment since it was felt they were being killed, not for the public good but to gratify the cruelty of an individual.

It is a rule, Sir, which I inviolably observe, to refer myself to you in all my doubts; for who is more capable of guiding my uncertainty or informing my ignorance? Having never been present at any trials of the Christians, I am unacquainted with the method and limits to be observed either in examining or punishing them. Whether any difference is to be made on account of age, or no distinction allotted between the youngest and the adult; whether repentance admits to a pardon, or if a man has once been a Christian it avails him nothing to recant; whether the mere profession of Christianity, albeit without crimes, or only the crimes associated with it are punishable-in all these points I am in great doubt. In the meantime, the method I have observed towards those who have been denounced to me as Christians is this: I interrogated them whether they were Christians; if they confessed it, I repeated the question twice again, adding the threat of capital punishment; if they still persevered, I ordered them to be executed. For whatever the nature of their creed might be, I could at least feel no doubt that contumacy and inflexible obstinacy deserved punishment. There were others also, taken in by the same infatuation, but being citizens of Rome, I directed them to be taken away.

Pliny, Letters to Trajan, X, 96. (Re: Christians in Bithynia; Province in Asia Minor)

The Greeks, on the other hand, saw Christianity as folly and foolishness; a strange doctrine which they would love to hear more of as they told Paul out of contempt and probably pity when he mounted the Areopagus to speak of Jesus Christ to these cultivated and well-educated men.

Even when this religion spread into Europe, it was in the Jewish synagogues that they first gathered for prayers and later on in the Domus Ecclesiae (house churches). The first heralds were Galilean fishermen who knew nothing of the sophisticated cultures of Greece and Rome.

How then did the faith become so European? How did Europe welcome the faith and why did the faith come to be so identified with Europe and not the Middle East from which it came? The answer lies in the fact that Europe made the faith their own. There is a sense in which Europe Europeanized Christianity by entering into a profound dialogue with it. She was then able to go back to the fonts of her culture to acquire the tools to make that faith comprehensible and appealing to the common man. In this process, she was able to blend her culture with the faith and produced a wonderful symphony whose legacy is there for all of us to see.

The scholastics of the 13th century stand out in this regard. They penetrated into the intellectual culture of Europe, her tolerance for foreign ideas; they tapped from the wisdom of the ancient sages who could be considered the intellectual fountains of European culture-Socrates, Plato, Aristotle, Plotinus, Cicero, Marcus Aurelius and so many others. They dialogued with them. Then they looked at other Abrahamic religions and their own journey in this regard, they read Moses Maimonides, they engaged with the Muslim philosopher, Ibn Sina (Avicenna) and then they delved into the gospels and strove to understand them through the prism of their culture. They sought to represent this faith in the soaring towers of her gothic cathedrals, literally theological Summas carved in stone. This was a long painful process, not always favored by all.

This epic struggle to define the faith in Europe was captured by this saying of Tertullian: “What has Athens to do with Jerusalem? Or the Academy with the Church?” (De praescriptione, vii). His view saw the incompatibility of European culture with the Gospel. But the good news is that this was a minority view which did not prevail. However, with the Reformation, it got back in to Christian Europe. With this cultural symbiosis the Gospel was no longer a reality alien to Europe but was seen as a fulfilment of their cultural aspirations. Aristotle’s philosophy of causality now explained and threw light on the Christian understanding of creation; Plato’s world of forms aided in the Christian understanding on the nature of God and the transcendent as well as Plotinus conception of the ONE.

Europe understood her culture so well and knew how to make it authentically Christian. They did not do away with their cultural symbols or events, they Christianized and rebaptized them. We can only think of the various Christian cultural practices today which predate Christianity, the eggs of Easter, the Halloween parties and most importantly the seasons of the church which in a way reflect the seasons of nature, the harsh winter, and its Lenten connotations, spring and rebirth with Easter, Christmas with the winter solstice and the feast of the sun god.

It was this gradual process of dialogue and enculturation which made this Palestinian faith (which at first refused communion with the uncircumcised) to become a European reality, its architect and its identity. As shown above it was not a walk in the park. It was fierce and treacherous right from the beginning. The council of Jerusalem in the Acts 15: 5-35, highlights this conflict. The Palestinian Christians wanted circumcision for all Christians. They wanted to make their unique cultural law into a binding universal law for all Christians. This was an unnecessary burden which would stifle the faith of the gentile converts. It was a cultural reality they were not only used to but would have probably found strange. After much deliberations, the apostles refused to make universal what was particular to Palestine. These gentiles had to enculturate their faith and make it theirs. We cannot blame these Palestinian Christians for their insistence on circumcision for that was their reality and so they thought their reality was the only reality and mode of transmission of Christianity. They could only transmit what they knew.

It is worthy of note that Christianity is not a culture, because it is not tied down to one geographical location or one people. It transcends all cultures and so each culture needs to continually engage with it, draw new lessons and insights from it. Africa too needs to dialogue with Christianity as Europe did. We cannot just sit and blame the missionaries who brought the faith to us for giving us a Christ clothed in European garments. That was the best they could do because that was the only medium they knew. We too need our own council of Jerusalem to be able to ‘defrock’ the European Jesus and put on him an African garb. This Jesus will remain the same Jesus of Christianity the Europeans and the rest of the world worship. But we shall be able to relate with him too because we no longer consider him foreign or alien. To defrock does not mean to change the reality of what Christianity is or who Jesus is. I am not advocating for a complete back to the drawing board theology but simply a theology of inculturation which will help the African relate to Jesus who is the same in a way that is more meaningful and more authentic.

We need to Africanize the Faith so that, like Hillaire Belloc, we too can say AFRICA IS THE FAITH AND THE FAITH AFRICA.